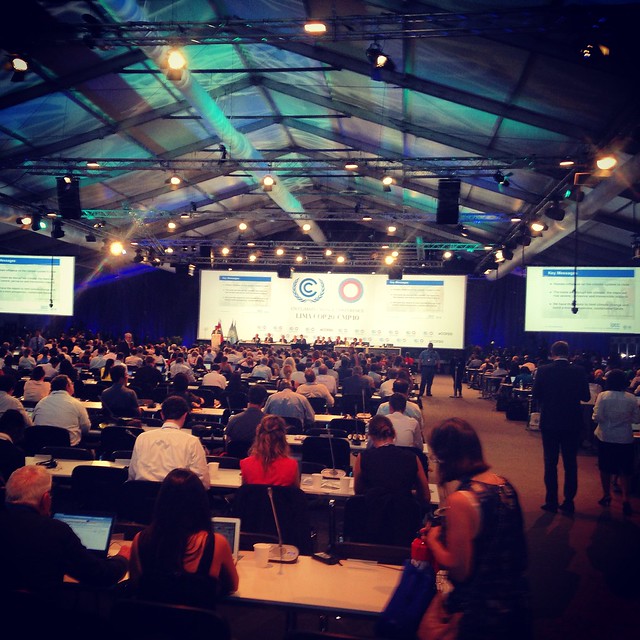 Another big day at COP20 in Lima. It started with IPCC Chair, Dr Rajendra Patchauri, outlining the overwhelming scientific evidence of the consequences for humanity and the life support systems of our planet of global warming. It is more than clear that we cannot go beyond 2 degrees of warming. US Secretary of State John Kerry then arrived and delivered an address which had no new announcements but his presence was to send the clear signal that President Obama wants an outcome at next year's meeting in Paris. His delivery was made more dramatic with the roaring of helicopters overhead letting us all know someone important was in attendance. The day is now ending with the President of the COP telling the packed to the brim Plenary Session that "we cannot leave Lima empty handed" and putting on the table the need for a new draft text by 9pm tonight.

Therein lies the frustration. The world needs a strong basis to work from to get an agreement in Paris next year, every big polluting country has spoken in favour of climate action but then they retreat into arguments about what is good or bad for them.

This kind of hypocrisy sums up Australia's position. Minister Bishop says Australia has a good story to tell on climate action, citing the examples of the Renewable Energy Target and ARENA, knowing full well as the words come out of her mouth that her Government intends to slash the RET and abolish ARENA. Today Australia won another Fossil of the Day Award for our double speak. That makes four out of nine - nothing to be proud of. Then late this afternoon Carbon Tracker released a report showing that far from reducing emissions by a lousy 5% by 2020, at the rate Australia is going we will be increasing emissions by 26% over 2000 levels. Soaring emissions are not what is required.

No wonder Ministers Bishop and Robb are totally focussed on having the Kyoto Protocol rort, as secured by Robert Hill in 1997, inserted into the second Kyoto commitment period. If the rest of the world lets Australia get away with this it will not only be a travesty but it will undermine the integrity of the accounting rules and climate outcomes into the future.

Asked in a press conference why governments are refusing to do what is needed to secure a safe climate, Winnie Byanyima, Executive Director of Oxfam International, put it more simply than anyone else at the COP. In our democracies governments, and hence their negotiators, are captured by the wealthy. She is right. I have no doubt that we cannot win on the climate, or win at reducing inequality until we take the power back. We are living in plutocracies, not democracies. Governments are owned by the big fossil fuel corporations and act accordingly. It is time the common good and the global commons become the top priority of government, not the profits of big coal and big oil.

Here's hoping some of the people power prevails tomorrow on the final day of negotiations.