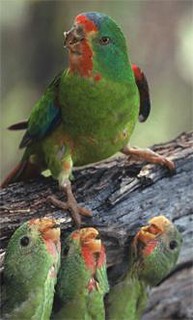 The last three days have been quite a revelation of exactly what's going on in Tasmania's forests. Regardless of the rhetoric of sensitive management of the forests, the real story is one of wantonly sending species towards extinction and viciously attacking those brave souls who stand up for protection.

On Monday, Bob Brown launched a new report by Margaret Blakers and Isobel Crawford into the state of the Swift Parrot (pictured). This amazing parrot, named in honour of its ability to cross Bass Strait in 3 hours (the ferry takes all night!), is listed as endangered, but, as the paper argues, should be upgraded to critically endangered as its population has recently crashed below 1000 pairs thanks to the logging of its only breeding grounds - the forests of south-eastern Tasmania.

Last Friday, Forestry Tasmania proudly announced that they would halt logging in the Wielangta coupes where the birds are nesting this season. Once the birds are gone, of course, Forestry will continue the slash and burn, destroying forever one of the last remaining nurseries for this beautiful little bird.

Bob made the point to Fran Kelly on Radio National breakfast on Monday that, with a species on the brink of extinction and the State Government doing nothing to protect its long-term future, the Federal Government has the right and the responsibility to step in and terminate the Regional Forests Agreement that covers the area preventing the Federal Government from taking any action to save thebird.

When challenged on the issue by Fran Kelly on this morning's breakfast, Peter Garrett ducked the issue, passing the buck to the Tasmanian Government:

"Under the RFA Act, it is the responsibility of the Tasmanian government to ensure that those management prescriptions that have been identified as necessary are undertaken and it's our expectation that that would be the case... The EPBC [Environmental Protection and Biodiversity Conservation] Act does not apply, and hasn't for some time, to override or to provide ... any necessary or additional actions over the RFA. Now that's always been the case."

A bold move by one of my former heroes.

Meanwhile, the Tasmanian Government, in whose trust Minister Garrett places the fate of the Swift Parrot, is led by a man crassly and wilfully ignorant of science. A recent study by the ANU has backed up what many of us have been arguing for years - that standing forests are far more valuable as carbon stores than they are as woodchips.

Premier Bartlett, on the other hand, told The Australian newspaper that "I don't think the logging of old-growth forests is necessarily related to climate change" and called the clear global position that standing forests are more valuable than logged forests "bullshit". You can read what Christine Milne has to say about that here.

But just to confirm one of the worst weeks for Tasmania's forests in years, we were notified last night of a horrific attack on protesters in the Florentine Valley yesterday, brave people from Still Wild, Still Threatened, trying to protect forests on the eastern edge of the World Heritage Area. They had locked onto a car in the middle of a forestry access road, peacefully but effectively blocking the ability of loggers to gain access and chop down the trees. They were attacked in their car, with loggers bashing the vehicle with a sledgehammer, eventually dragging one protester out and kicking him in the head. One particularly brave protester caught it on a phone camera and the footage is now making its way around the globe.

A warning. This footage is not for the faint-hearted, or for those who dislike coarse language.

Footage currently unavailable - apologies. We will try to fix this asap.