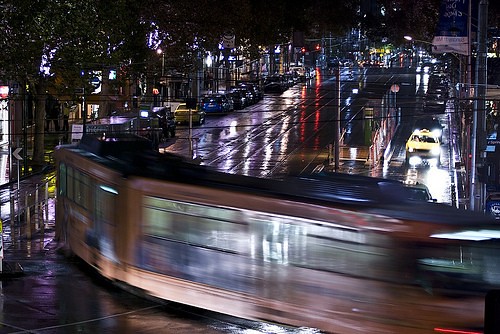 The Senate Inquiry into Public Transport has tabled its report which makes a compelling case for substantial Commonwealth funding for public transport.

The Committee recognised that public transport:
• moderates traffic congestion;
• improves the general urban amenity when coupled with priority to walking and cycling;
• improves energy efficiency, reduces reliance on imported oil, and reduces transport greenhouse emissions;
• promotes public health; and
• is needed to reduce the transport disadvantage and social isolation of people without cars.

You can also read the full report, or the speech or the media release.

Some of the highlights:

• Recognises that building more roads does not alleviate congestion, but rather encourages growth of traffic and entrenches patterns of urban development that create high car use.

• Recognises the need for more bus and tram priority measures to attract motorists from congestion traffic onto public transport.

• "It would be wise for Australia to pay more attention to 'peak oil' concerns, and to adopt strong policies to reduce its oil dependence in the long term.

• That the CPRS alone is not enough action from the Federal Government to take to mitigate transport emissions.

• Connection between car-dependent lifestyles, inactivity and incidence of overweight needs action in both public health and urban planning fields.

• That cost-benefit analysis of public transport investment should give adequate attention to externalities and matters hard to quantify.

• It is estimated that $3 billion per year is saved through reduced traffic congestion due to walking, cycling and public transport use at current levels. This is expected to double by 2020.

• Public subsidy for public transport is high - around $3.3 billion per year ($4.9 billion cost less $1.6 billion in revenue raised through fares) for the five capital cities.

• However that is little compared to the $55 billion Australians spend on car ownership and use per year. You then need to add the public cost of infrastructure to support that use (roads / parking / external costs like congestion and accidents)!

• 72% of journeys to work in Sydney's CBD are made using public transport, 60% in Melbourne and 35% in Perth, thus existing congestion free rail services are very important for supporting the economic life of central business districts.

• Public transport trips increased by 14.7 per cent from 2004 to 2008, and the public transport mode share increased from 9.3 per cent to 10.6 per cent in the eight capital cities. This growth is well above population growth and is said to be increasing petrol prices and 'changing community attitudes'.

See all the submissions to the inquiry here.