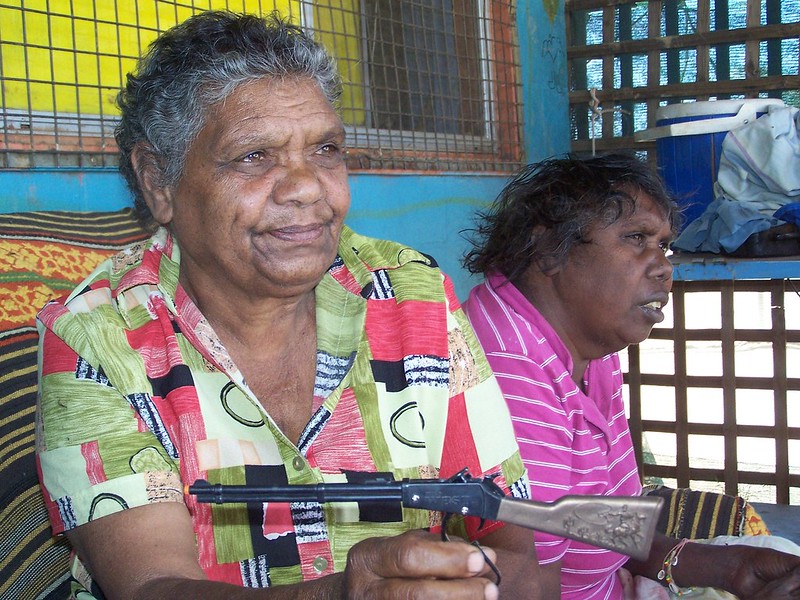 Last Thursday (Oct 9th), a large number of police participated in a raid of the Kunoth town camp in Alice Springs. Officers jumped over fences to enter the camp, displayed rifles, pushed and abused residents and trained a laser on the chest of one man.

Police claimed they were looking for weapons, following a tip off from the fire brigade that there were guns in a car that drove back to the camp. A miniature toy gun was later found on the dashboard of the car.

Under the NT Intervention, police have been given new powers to enter "prescribed areas" without warrants, and many police have been brought into towns who have no experience dealing with local communities.

"Apparently there were guns stolen in Alice Springs earlier in the week. And they just assumed it was our Aboriginal kids."

"Its so scary to see your kids get harassed like that. At gun-point. One of them could have been shot by accident. They even had bullet proof vests on. Lights were shining into the camp from outside and that blinded us. What if someone came walking out with a stick? They could of been shot"

"We need human rights you know. That's why we feel sad. Its been just like we been chained up again, like our ancestors did in the past. They were chained up and dragged like animals. We don't want that to happen again, for our children, and their children you know. We gotta stand for our rights."

NT Police Duty Superintendent Jamie Chalker said the police attendance was an appropriate reaction to reports of an armed person in a public place. He encouraged any people who were concerned about the police
actions to make a formal complaint which will be investigated by the
Ethical and Professional Standards Command.

For further information, check out www.rollbacktheintervention.wordpress.com