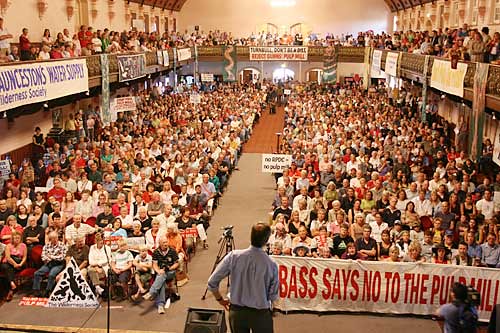 Whatever Gunns does with the permits, this environmentally evil company will continue to log 200,000 hectares of Tasmania’s wild forest and wildlife habitats. That’s third world practice, not world’s best. And the mill will inject over 100 million tonnes of greenhouse gases into the global atmosphere accelerating climate change.

Gunns' failure to announce a pulpmill partner by the end of the financial year, as promised, shows yet again that no one is willing to sign an agreement.


In April Gunns announced that it would 'provide a further market update when the terms of the agreement are finalised, which is expected to be in June 2009.' Obviously they have failed to reach an agreement with any potential investment partner. Read full press release on Gunns' failure to announce pulp mill partner.

The Rudd government is continuing to support Gunns' proposed pulp mill through direct and indirect subsidies. The Minister for Forests, Tony Burke, quite clearly outlined one subsidy in last week's Ministerial Statement on forests:

The Pulp Mill will stink, watch ABC's 7:30 report programme on a leaked document that raises new concerns about the odours that will be emmitted from the mill.