Last days of UNFCCC COPs feel pretty much the same year in, year out, no matter where in the world they are held. There are in fact parallel universes in operation. On the one hand, climate experts, activists, scientists and others pile into the COPs at the start of the fortnight enthusiastic about strong action on climate change. On the other hand, towards the end of the fortnight the climate talks get to the pointy end, with stress and tension spreading as the fear begins to build that no agreement may be reached.

On Thursday night when a new text was distributed countries were open to working on it in good faith. That process continued slowly all day. Stocktaking and negotiation plenaries were convened and reconvened, the COP was extended into the night until yet another iteration of the draft text was distributed at 2.30am.

Countries are concerned that they had not been consulted on that new text. The draft text has now lost references to items like "loss and damage", close to the heart of the least developed countries and the small island states.

It is not over yet and the plenary will be reconvened at 10.00 this morning but the ghost of Copenhagen hovers overhead.

At COPs before Copenhagen when disagreement threatened to result in no outcome, a representative of each of the negotiating groups met in a room until they had thrashed out their differences. At Copenhagen, and since, it has become a presidential style with the COP President taking it upon him or herself to develop a new text and choose who will be consulted and to drive an outcome. It feels like railroading for a number of countries and this top down approach is not getting the best out of a United Nations process where one vote one value is the basis of decision making.

After the US-China announcement last month, momentum had begun to build for a strong outcome here in Lima but that has not translated into action to date. There is cognitive dissonance between what countries say in their grand addresses to the plenary or the media and what they do in negotiation process. The world has not worked out how to put the global commons and the common good above national sovereignty even in the face of a catastrophic collapse of the global commons that will impact on every nation and all people.

Australia is typical of this disingenuous behaviour. I spent a few hours today with the help of experts coming to grips with the extent to which Australia plans to exploit the Kyoto Protocol land use accounting rules to give itself windfall gains in emission reduction. But it needs the rest of the world to agree and it is likely that will happen. It frustrates me that other countries continue to allow Australia to get away with it. It is because they have their own internal problems, especially the European Union. The EU wants the rules to be agreed here in Lima so that they have time to consider and ratify the Kyoto Protocol second commitment period before Paris but they fear a fight with Australia will put this at risk. The fight over Australia's rort is not considered secondary to the political momentum that the ratification of Kyoto Protocol second commitment period could bring.

Australia was awarded the Colossal Fossil, the highest award for appalling behaviour. Canada won the Fossil of the Day.  Stephen Harper and Tony Abbott will be so proud.

I mentioned the parallel universe that operates while the negotiations go on and that is the world of the Exhibition Hall and other side events for business, science, poverty and justice. Here is where you meet great people working to drive climate action and awareness. I love meeting young people and some of the most outstanding people I've met are from Australia working in public health, the law and environmental policy. It is what gives me hope that this process will achieve an outcome in the end no matter how unwieldy it feels. 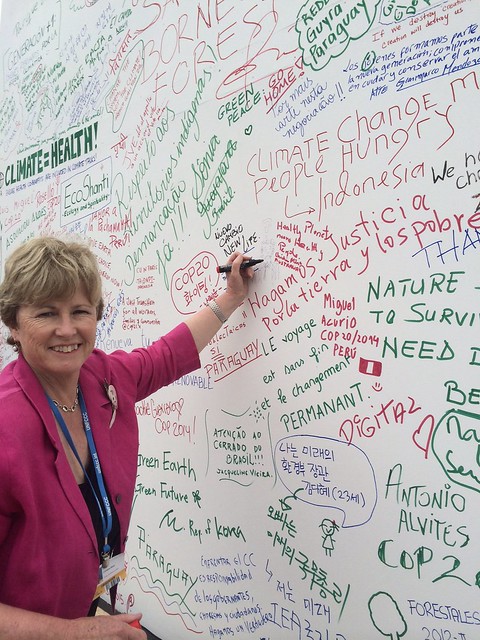