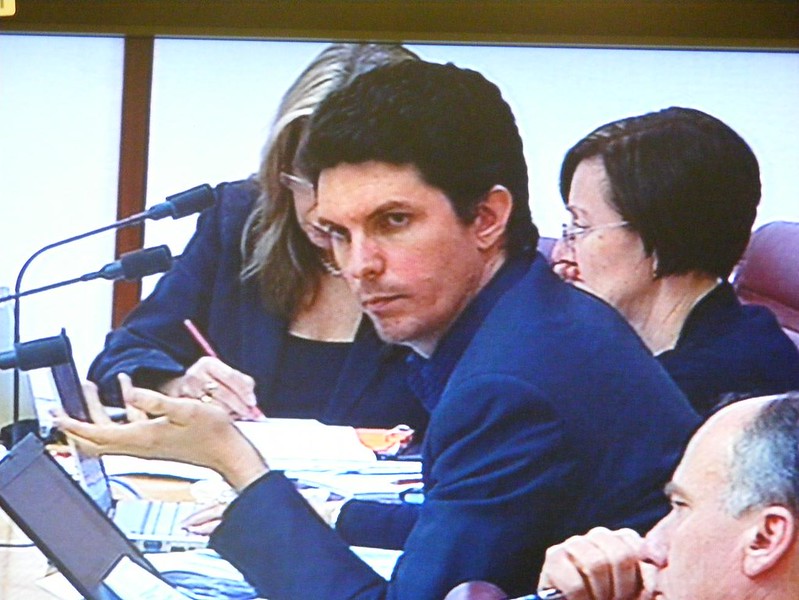 Despite the long waits, frosty temperatures and short tempers that we endure, I admit to looking forward to the two weeks of Budget Estimates committees. Weird, but true.
Budgets have been described on occasion as the soul of a Government. To find the real priorities of those who seek to hold power, its worth looking past the sound-bites and fine speeches to see where the dollars are coming from and where they go (they're your dollars, after all).

Do we favour military hardware over international diplomacy? Yes, as it turns out. The bottom line says so in Budget Portfolio Statements (PBS) 1.5 (Defence) and 1.10 (Foreign Affairs). How much is the net filter expected to cost the country? See if you can find it in Budget Portfolio Statement 1.3. (It's not there, is it? That was just a deliberate waste of your time. Welcome to estimates.)

In practice, budgets are handed down in two or more dense 'appropriations' bills which detail every dollar of Commonwealth expenditure, department by department, and which need to be passed through both houses of Parliament like any other piece of legislation. The Senate's eight standing Legislation Committees grind through a fortnight of 14 hour days interrogating the public servants responsible for actually spending the money, before the bills are put into the Senate for debate.

The officials on the other side of the table can be alternately helpful, insightful, wry, obstructive, slippery or downright bloody minded, depending on how politically sensitive the entrails are that we're poking around in. But if you ever wanted to know how the recondite internal machinery of government is fuelled day after day by your taxes, Budget estimates is the place to hang out.

Thanks to everyone who helped with questions, tipoffs, random rumours and bright ideas for lines of inquiry - they are always welcome and treated in confidence.
The following links take you down the various rabbit holes we fell into in one autumn fortnight in 2010...

Before it was delivered on 11 May, I made a strong pitch to the Attorney General to use this budget to fix the crisis in the legal service sector. If we don't pay for the justice system to work, we all pay. I registered my disappointed with the Attorney General's Department that providing an additional $154 million in the budget for the entire legal support sector is a good start which doesn't go far enough to address Legal Aid cutting services, Community Legal Centres turning away half the applicants, and Aboriginal Legal Service lawyers taking up to 60 cases per day.

I asked the National Native Title Tribunal and the Australian Law Reform Commission about the impact the significant funding cuts will have on their work. We touched on the scale of this budget cuts and the increasing disregard with which the government treats independent legal advice on their legislation.

ASIO were not able to tell us much about the review they are supposedly being subjected to, but did explain that the new 10-person strong multi-agency counterterrorism control centre will be based in ASIO and cost 9.1 million over four years. The Australian Federal Police detailed their efforts to crack down on child pornography in their high-tech crime operations area. They also assured me that a car bombing of one of Australia's more militant unions in Sydney was never considered politically motivated or a terrorist threat.

While the Chair was keen to shut me down on the issue of the appalling massacre of peace activists in the Mediterranean, I ploughed on regardless and also asked about the government's action on Israel forging Australian passports for extrajudicial murders.

Mark Scott of the ABC was keen to discuss digital TV switch over, but did not know about the curious decision taken by ABC TV to accept and then reject the documentary 'Hope in a Slingshot' about aspirations for peace on both sides of the Israel/Palestine conflict. ABC's editorial guidelines would suggest the broadcaster needs to procure a pro-war documentary to provide 'balance' - stay tuned to see how this odd standoff gets resolved.

I asked the Special Broadcasting Service about the rate of traffic they are getting on their website, and their continuing struggle to cope with gradual financial strangulation. Subsequent moves to cut jobs in subtitling and the newsroom are hardly encouraging.

I find the communications portfolio most fascinating, partly because of the active interest of the twitterverse following #estimates, suggesting lines of inquiry and analysing the discussion as its happening. There was a helpful session with the Australian Communications and Media Authority about how they manage prohibited content blacklists of URLs. I asked the Privacy Commissioner about the legality of Google harvesting data from open Wi-Fi networks while creating their Street View service (they weren't sure). Minister Stephen Conroy launched into a fascinating spray about online privacy while I was trying to discuss internet filtering with him, perhaps his reason for taking no less than 11 questions on notice. The NBN Co discussion with CEO Mike Quigley provided a useful update as the rollout charges ahead in the absence of legislation.

Midway through week one, estimates got radioactive as it always does. A serious leak of radioactive water from the Ranger Uranium Mine into Kakadu National Park made my usual talk with the Office of the Supervising Scientist a little more interesting, with new revelations emerging about pollution spikes and long term impacts in Kakadu.

The serious occupational health and safety breakdowns revealed by whistleblowers at ANSTO have been the subject of several Estimates discussions. A damning report from the nuclear regulator ARPANSA has confirmed warnings made by whistleblower Dave Reid who has been out of work since he revealed what has been going on at Lucas Heights.

We questioned the Department of Resources and Energy about their unwelcome endeavours to impose a Nuclear Waste Dump on unwilling Aboriginal communities in the Northern Territory, and about the Department's significant funding of a particularly toxic industry front group, the Uranium Council. Geoscience Australia provided some sketchy information as to why their website does not document the extensive seismic disturbances in the Tennant Creek area, something local people are keen to know more about before they agree to host a nuclear waste dump.

I asked the Department of Prime Minister and Cabinet, where the Independent National Security Legislation Monitor could be found. They didn't know. Why it is taking so long to appoint someone to review Australia's extreme anti-terrorism laws? Given the mandate of this office and the complex and controversial pieces of legislation that need to be reviewed, making this office part time and taking two years to get on with it is a worrying indicator of the Government's priorities.

In the most frustrating ten minutes of Estimates fortnight, (which I got out of my system in this blog post), another set of pathetic excuses were offered for why the government is taking an impossibly long time to establish a recycling scheme for drink containers.

I asked about political prisoners and the endlessly delayed bilateral Human Rights dialogue when the issue of Tibet came up in the Foreign Affairs Committee. I also asked whether there had been any changes to the government's flawed sanctions regime on Burma (no), and congratulated the Government on a substantial increase in AusAID's budget for Burma.
The Department of Foreign Affairs had not heard about the Security Council sanctions committee report that included recognition that North Korea has provided nuclear and missile technology to Burma. As always, the officials at the table were generally noncommittal and disappointing about other nuclear weapons issues.

I asked Infrastructure Australia about how they chose the successful projects from the many submissions they receive, and noted that the entire budget provided not a single dollar for public transport. There is still no assessment of transport infrastructure spending against likely future oil prices, which means our country is still walking blindfolded into the age of peak oil.
I asked a number of questions to the Department on transport issues, such as Sydney Airport, the health and safety standards of airport traffic control operators of Civil Aviation Authority, Rail manufacturing in Australia, and the M5 Freeway expansion.

The increased support in the budget for mental health services for defence personnel is genuinely positive. While one in five US defence personnel returning from Iraq or Afghanistan are recognised as suffering from post-traumatic stress, Australian defence personnel are apparently not suffering on the same scale. While it would be vastly preferable that our troops had never participated in the illegal conflict in Iraq or the doomed occupation of Afghanistan, when people sent into harms way by governments are damaged they deserve the best care that can be offered.

Lastly, these sessions on housing affordability and building codes rounded out the fortnight, after which everyone stood down and got some sleep.

Systemic racism is the problem: Greens