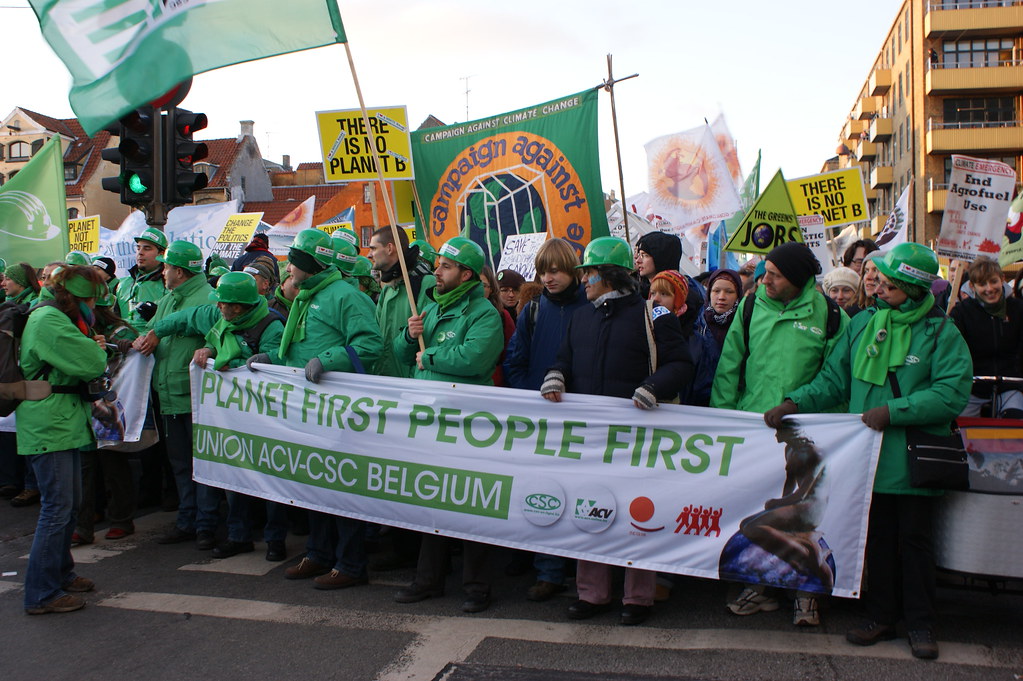 After days of no progress at the Bella Centre it was exciting and inspiring to be part of a crowd of 100,000 people rallying for a "real deal" in Copenhagen.

The Greens from all over the world had been told to go to a marshalling point outside the Danish Parliament at 12:30 pm with the march scheduled to start at 2pm. When we arrived, a sea of people, banners, flags, bicycles, rugged up children, prams, Chinese dragons, polar bears and giant snowmen were all assembled in front of the Parliament making it initially difficult to find Die Grunen (German Greens), Ecolo and other international Green party flags. The temperature was freezing, despite a brief appearance from the sunshine, and a trolley powered by a bicycle providing free hot chocolate to the crowd was very welcome.

Placards captured the mood and sentiment of the crowd: "Nature doesn't compromise", "there is no planet B", "blah blah blah action now", "change politics not the climate" and "our planet has a fever". Whilst there were a large number of arrests, the rally was overwhelmingly peaceful.

Let's hope that this amazing outpouring from civil society all around the world, including the thousands who marched in Australia, will put some backbone into the political leaders arriving in Copenhagen this week to do what is necessary for a safe climate. I hope Kevin Rudd takes note and lifts Australia's ambition above his unacceptable 5 - 25% emission target range.

But, after this outpouring of public sentiment, public involvement will be restricted in the Bella Centre this coming week. The numbers allowed into the conference have been limited to 15,000 for security reasons, despite 34,000 people from all over the world having registered to attend. This means over half the people who have travelled from around the globe and committed to being part of this event will be shut out. Access to the conference centre - the only real place where NGOs and other civil society representatives can actually speak to delegates - will be granted through a small number of cards given to each organisation accrediting people. This is likely to lead to increased anger and frustration as those excluded are disproportionately the ones who had fundraised and scrimped and saved to be in Copenhagen because they have such a large stake in the outcome.

Of course, Australia's over 100 official delegates won't be the ones forced to wait out in the cold.